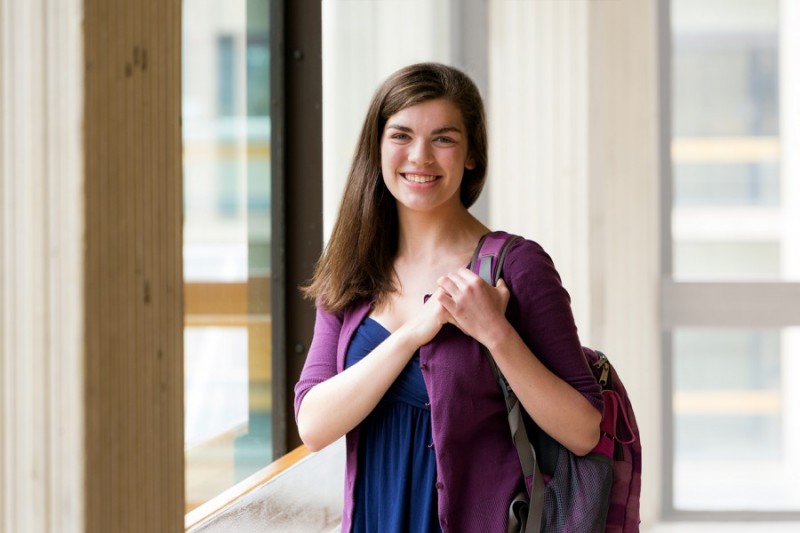 For Emma Ryan, the Harpur Fellows program is a reminder to students that they can make an impact around the world. “That’s something meaningful, and the fact that Binghamton University wants to support that is satisfying in itself,” Ryan says. She was one of four Harpur College students who contributed to communities during summer 2016. The other fellows were Phillip Cornelius, Rachel Lubinga and Kanyawee Thipthamai.

In the summer of 2014 Emma Ryan traveled to Ghana with members of her Syracuse area church to work on bettering education. Upon returning, Ryan realized she wanted to do more. “In Ghana, there is so much needed everywhere you look,” she says. “I found Harpur Fellows and saw something I could do to make more of an impact for the people.” Her Harpur Fellows project, “Connect2Worawora,” plays off the former name of Binghamton University’s Wi-Fi network: “Connect2BU.”

Ryan spent two weeks in Ghana over the summer, providing internet access and educational software to the community library in Worawora, which is located in the Volta region of Ghana near the border of Togo. The Syracuse native also oversaw a number of workshops with teachers and students that were aimed at enhancing education with technology.

“We (built) furniture to accommodate computers, installing routers and ceiling fans,” Ryan says. “Teachers will be able to schedule time to use the internet to incorporate it in their classes,” she adds. “I wanted to be able to get the community acclimated in a technology-friendly environment in an effort to enhance their academic and professional careers.”

Ryan worked in partnership with Kofi Addai, who is a leader of a nonprofit organization called PACE-Ghana. Addai’s group provides educational resources such as community library and school facilities, school materials and computer labs for under-resourced communities. “We discussed the computer lab project and thought it was a good way to bring benefit to the community,” Ryan says.

Ryan, a senior studying integrative neuroscience who plans to pursue a master’s degree in public health and attend medical school, hopes that her project will give the residents of Worawora a greater opportunity to succeed in the digital age. “Giving back and being able to know that I did more, that’s what I want to do,” she says. “There is so much needed, but nothing was being done about it.” 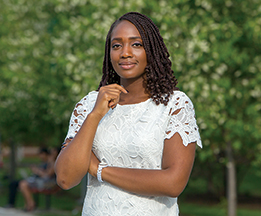 To Rachel Lubinga, being a Harpur Fellow means going home again. In January 2015, Lubinga traveled to her native city of Kampala, Uganda, to intern at a hospital and clinic in rural Kalisizo, located in the Rakai District about 100 miles to the south. Her experiences there inspired her to return this year — but with a different goal in mind. “I went back thinking: ‘What can I do that will allow me to learn from them and the people there to learn from me?’” says Lubinga, a senior majoring in integrative neuroscience.

She quickly noticed the absence of teenagers coming into the clinics for information or services. The staff informed her that it was largely due to teens feeling as though they would be judged for going through conditions that are common during puberty. Lubinga decided to focus her attention on a different issue facing the Rakai District: the debilitating effect menstrual cycles have on the education of teenage girls. “High school girls were missing school because of their menstrual cycles,” Lubinga says. “Sometimes we see that happen in the U.S. for a day or two, but there it was for a full week or more.”

Rachel Lubinga spent the summer working with students in the Rakai District of her native Uganda.

Lubinga’s project, “Menstrual Hygiene and the Attainment of Adequate Education for Adolescent Girls,” found ways to make feminine hygiene products more accessible and less costly. Over the course of four weeks, Lubinga teamed up with AFRIpads Ltd., a Ugandan company that sells low-cost, reusable sanitary pads, to visit eight schools where she educated girls on the importance of menstrual hygiene and care. Each school was part of a three-day workshop that included surveying the students, providing information on the topic and creating focus groups.

For Lubinga, who hopes to pursue a master’s degree in public health and administration after graduating, the project provided invaluable insight, but more importantly she looks forward to the lasting effects it will have on the people she encountered. “It’s a once-in-a-lifetime opportunity to share what you are passionate about and to impact lives,” Lubinga says. “Being a student who aspires to have a career in medicine and public health, I wouldn’t have it any other way than to incorporate my passions in my home country.” 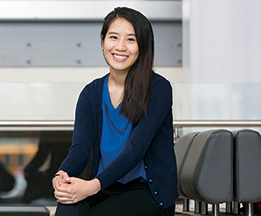 Kanyawee Thipthamai is fighting to keep the culture of Muay Thai boxing alive in her native country. “In Thailand, people don’t really acknowledge the culture part or the beauty of the sport,” Thipthamai says. “I want to do something to change that.”

Thipthamai, a senior majoring in economics, traveled to Bangkok, Thailand, for three months during summer 2016 to host a series of events called “Muay Thai in the Park” that offered free demonstrations and instruction from retired boxers. “I can kill two birds with one stone,” Thipthamai says. “I can spread [the culture] and let people experience Muay Thai for free. For me, it’s like a passion that I am going to fulfill.”

Born in Thailand, Thipthamai moved to Woodside, N.Y., at age 14. However, she still feels close to the boxing community in her native country. Thipthamai learned Muay Thai, a fighting style that started as a method of selfdefense for disarmed soldiers, at a young age from her father, a former boxer. Muay Thai is considered an “eight-point” fighting system that uses feet, knees and elbows to attack. “Thai boxing is great self-defense,” Thipthamai says. “I feel more comfortable walking on the streets wherever I go.

It’s my pride to know boxing.” During her first month of preparation in Thailand, Thipthamai trained 10 to 20 retired boxers facing financial struggles and trauma-based injuries to expand upon their futures through teaching the sport in Thailand or abroad. “Some of the boxers who are retired have to sell food or CDs on the street when they once were champions,” she says, adding that most of them had dropped out of school in their youth for boxing and were never taught to save their money or plan a future beyond the sport.

After training the boxers to teach as well as behave in a working environment, Thipthamai’s project provided free boxing instruction. Thipthamai says Harpur College has helped her attain a good work ethic that enabled her to face the challenges of her project. “I was really happy,” Thipthamai says of being awarded a Harpur Fellowship. “I actually thought about this idea two years ago. This was a good opportunity and I needed to grab it.” 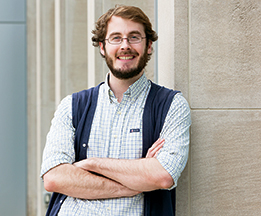 Phillip Cornelius spent his summer helping to increase literacy in the Binghamton community through children’s books. “Literacy is one of the most valuable skills you can give to someone,” says Cornelius, an English major. “Growing up, literacy was very much encouraged in my home.”

Cornelius’ project is based on the Bright Red Bookshelf, a literacy program that he benefitted from in his hometown of Ithaca, N.Y. He has brought the encouragement of literacy to the Binghamton community by installing bookshelves filled with children’s books in establishments that are frequented by families that may not have had access to reading materials in the past. “The Harpur Fellows Program has given me funding and the connection with the Education Minor Steering Committee, the Education Club and the Center for Civic Engagement — all groups that (assisted) my project,” he says. “This has allowed me to pursue this project which is something very real and very concrete. It is fulfilling because so few students get this opportunity.”

Cornelius conducted his Harpur Fellowship project while also working on a separate project as a Summer Scholar and Artists Fellowship recipient. As a summer scholar, he examined messiahs in science fiction literature under the guidance of Joseph Keith, associate professor of English. The senior hopes to be a professor one day and says the Harpur Fellows program is just the beginning of what he wants to achieve.

“Binghamton has given me this opportunity and right now everything that I am doing is toward an end in the future,” Cornelius says. Cornelius plans to keep the project alive through an internship offered by the Center for Civic Engagement once he has moved on from Binghamton University. “Within the city community, I hope children engage in this project and take the books off the shelves and I hope that there is an increase in literacy,” Cornelius says. “Within Binghamton University, I hope students try to further the mission of fostering literacy within the community.”

The Harpur Fellows program, now in its sixth year, is made possible by support of Harpur alumni and donors. It is designed to give undergraduates the opportunity to pursue a self-designed project that will serve a community and contribute to their intellectual and personal growth. Those selected for the fellowship receive up to $4,000 to pursue their project and are obligated to give a public presentation when they return to campus (usually in the fall).

Posted in: In the World, Harpur