Alumnus is acting executive director of the renowned Kinsey Institute 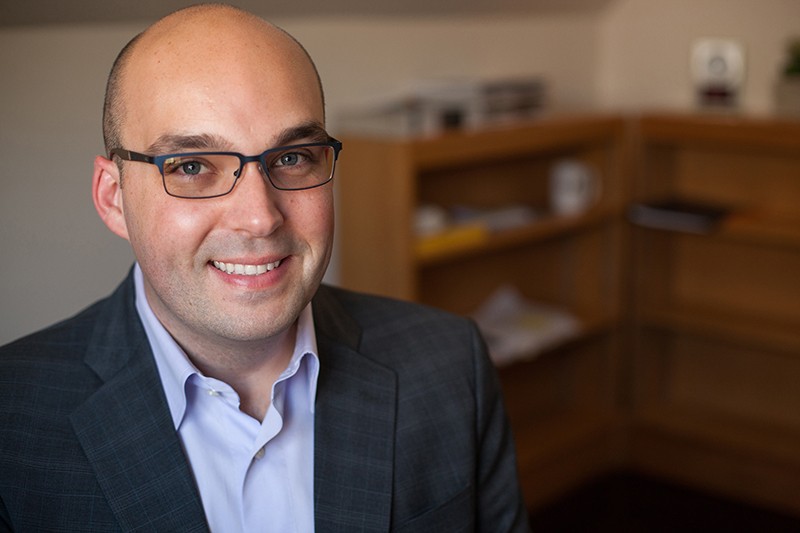 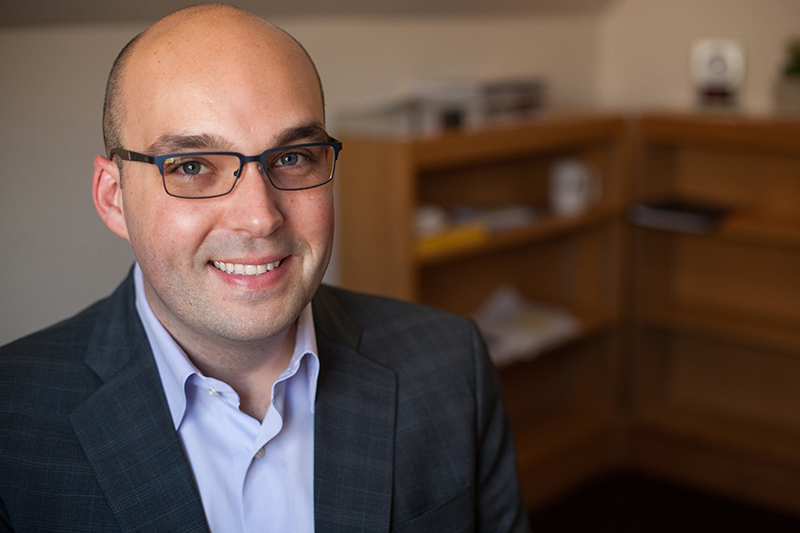 Less than a decade after receiving his doctorate from Binghamton University, Justin Garcia is the new acting executive director of the Kinsey Institute. Image Credit: Photo courtesy of Indiana University.
By Eric Coker

Justin Garcia ’07, MS ’09, PhD ’12 was on his way to a postdoctoral interview at the prestigious Kinsey Institute for Research in Sex, Gender and Reproduction when he started to have second thoughts.

“I thought: ‘This is crazy. I’m not really a sex researcher. I have no business being here,’” he recalls. “I almost didn’t get off the plane in Indianapolis. I thought about getting on another plane and going back to Binghamton.”

Garcia was right: He was not yet a sex researcher. But Garcia was an evolutionary biology scholar with more than a dozen published papers to his credit at Binghamton University. And he had also served as a scientific advisor to Match.com since 2010.

Luckily for Garcia and the Kinsey Institute, there was no flight home. Garcia not only got the position, but nine years later he leads the institute as acting executive director. At age 34, he is the eighth — and youngest — director in Kinsey history.

“The previous directors have generally been much more senior than me and later in their careers,” he says. “It’s a remarkable responsibility. The Kinsey Institute is an extraordinary place, thanks to amazingly talented colleagues.”

The Kinsey Institute, located on the campus of Indiana University in Bloomington, was founded in 1947 by Alfred Kinsey and is the world’s premier sex research institute, exploring sex, sexuality, relationships and well-being. Besides research, education and outreach, the institute is home to one of the world’s largest art, archival and library research collections of sexual materials.

Garcia became acting executive director in summer 2019, succeeding Sue Carter. He also serves as the institute’s research director and is a Ruth Halls endowed associate professor of gender studies at Indiana University. In 2019 he was also named an IU Bicentennial professor to promote public understanding of science. Garcia is an award-winning researcher and educator, having published numerous academic articles and chapter and is co-author of Evolution and Human Sexual Behavior (Harvard University Press).

As acting executive director, Garcia’s priorities are to stabilize the Kinsey Institute, promote research excellence and collaborations, provide resources and strategic direction to faculty and staff, and prepare for the institute’s 75th anniversary celebration in 2022.

“We’ll be moving into new physical space, so I’ll oversee space planning, as well as fund-raising and the launch of a new capital campaign, strategic initiatives, education and outreach, and primarily growing and strengthening the research program,” he says.

Finding creative sources of funding is imperative for the Institute. In August 2019, the institute received a $2 million gift to establish an endowed chair.

“A lot of my focus has been working with donors and foundations to think about how we conduct sex research in today’s age,” Garcia says. “It’s everything from asking questions about the role of the digital age in our sexual and romantic lives to the #MeToo movement to sexual and gender diversity and LGBTQ+ issues.

“How do we talk about and research all of these contemporary issues that are important? And how do we fund that research? The 75th anniversary is a chance to look back at the last three-quarters of a century to celebrate and honor what we’ve done, but to also map out a sustainable future.”

From Binghamton, with love

The Queens, N.Y., native started his undergraduate research career working with Distinguished Professor Linda Spear on alcohol’s effect on adolescent neurological and behavioral development. A cousin’s battle with brain cancer led to an interest in the complexities of the brain. Garcia gained a master’s degree in biomedical anthropology with Professor J. Koji Lum, and spent much of his Binghamton years working under the mentorship of Distinguished Professor David Sloan Wilson in the evolutionary studies program (EvoS).

By the time Garcia completed his doctorate in evolutionary biology, his research had broadened to focus on the evolutionary foundations of variation in monogamy, intimacy and sexual behavior, with an emphasis on biocultural approaches to sex, gender, dating and reproductive strategies.

“Justin became involved with EvoS as a freshman and just kept on going,” Wilson says. “I have never seen such a networker! Even as an undergraduate student, he became involved in multiple collaborative projects leading to publications. I’m very happy for his success — but not very surprised!”

Garcia credits faculty mentors such as Wilson, Lum, Anne Clark and Ann Merriwether with his career success, “even if I occasionally tested their patience,” he says with a laugh.

“They always supported and cultivated my interests, and guided my development as a scientist,” Garcia says. “They also made sure to introduce me to senior colleagues at conferences or who were visiting campus. I would be somewhere with David and he would always go out of his way to say to his colleagues: ‘Do you know Justin?’ Of course, they didn’t know me! My mentors opened doors, made connections and created opportunities for me.”

“It’s a special place,” he says of Binghamton. “I learned a lot, launched my career, and made lasting relationships there. I had a good time.”

When Garcia isn’t meeting with Indiana University administrators or working to establish new strategic partnerships, or working on his own ongoing research program, he is often on the road. He recently travelled to Thailand to observe monogamous primates in the wild, Las Vegas to conduct research interviews, Los Angeles for fundraising, and Washington, D.C. to meet with members of the American Psychological Association and the Sexuality Information and Education Council of the United States. He has hobnobbed with celebrity activists such as Laverne Cox and George Takei.

But Garcia is also mindful of promoting and defending the work of the Kinsey Institute. He is quick to point out how sexuality and relationships impact people’s lives and well-being, and notes that the institute is in its 10th year of the annual Singles in America study with Match, that he started at Binghamton University in 2010. The largest study every conducted on singles, the study is now examining topics such as dating, sexting, and if women believe that the #MeToo movement has changed the behavior of men.

Garcia also acknowledges that there are those who don’t agree with the mission and research of the institute. He emphasizes compassion and trying to understand protesters’ point of view.

“Why do you think there shouldn’t be sex research? Or no sex education in schools?” he says to naysayers. “Here’s what the data says: It’s much better for physical and psychological health to have sex-ed in school and here are the reasons why. I’m not always successful (in persuasion), but we have an obligation to try.”

On Friday afternoons, Garcia usually heads to a coffee shop to do some writing for his latest project: a book called The Intimate Animal. It will focus on the intersection of love and sex throughout the life course, while examining the tensions between social and sexual monogamy.

“I’m trying to address what’s going on in America now and examine whether we really are a species in an intimacy crisis,” he says. “How are these tensions playing out? Most people would say not too well. People report difficulty with dating and maintaining healthy relationships. How can research help us have more satisfying intimate lives? I ask how understanding tensions between love and sex – in both the best and worst cases – can explain the highs and lows of our relationships both in our evolutionary past and today.”

The book is scheduled to be released to a mainstream audience in early 2021 by Knopf. Penguin Life will publish soon after in the UK, with global translation rights to follow.

“The work my colleagues and I are doing is important to our understandings of love and sex, and this is a fantastic opportunity to let people know how scientific research on these topics can help shape our lives,” he says. “It’s great for any academic to be able to say: I’m passionate about this work, and this is the reason why I dedicated my career to research and teaching and disseminating knowledge.”