Class of 2017 hears from three other honorary-degree recipients 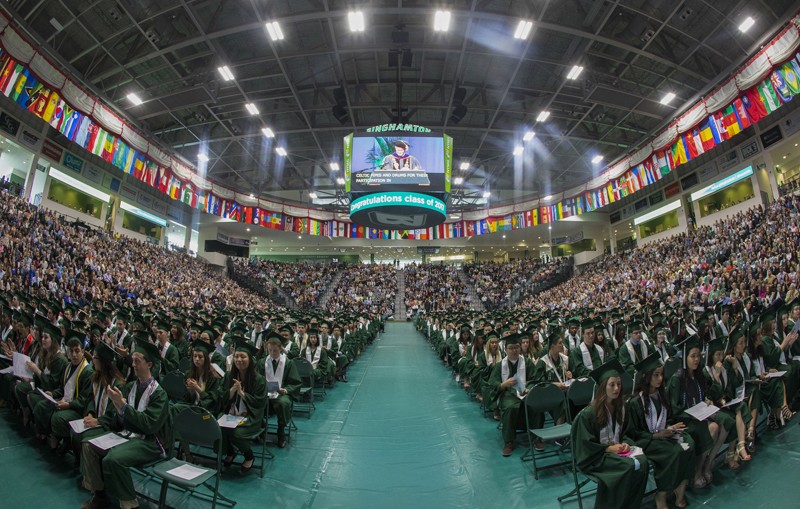 Tony Kornheiser ’70 admitted that he found it surprising to be awarded the Doctor of Letters at Binghamton University’s 2017 Commencement.

“It’s odd because I don’t know that I can go in order with all 22 letters of the alphabet,” the sportswriter, radio host and television personality said to a laughing audience. “That’s a joke. I know there are 24!”

The University conferred more than 3,700 degrees for bachelor’s, master’s and doctoral candidates at eight Commencement ceremonies, held May 19-21 at the Events Center. It marked the first time that the Events Center’s new scoreboard was used to simulcast the ceremonies.

Stenger called Commencement “my favorite activity of the year.”

“This degree – and the knowledge and talents it represents – will enable you to go far,” he told the graduates. “You have proven that you have the broad perspectives to understand and empathize. You have the ability and tenacity to work through different challenges. You have the vision and ingenuity to develop innovative solutions to our world’s problems.

“As graduates, the possibilities open to you have increased exponentially,” he added. “Yet as my mother told me when I graduated many years ago: It’s not the degree that’s important; it’s what you do with it that matters. I’m excited to think about your future and what it holds for you and our world.” 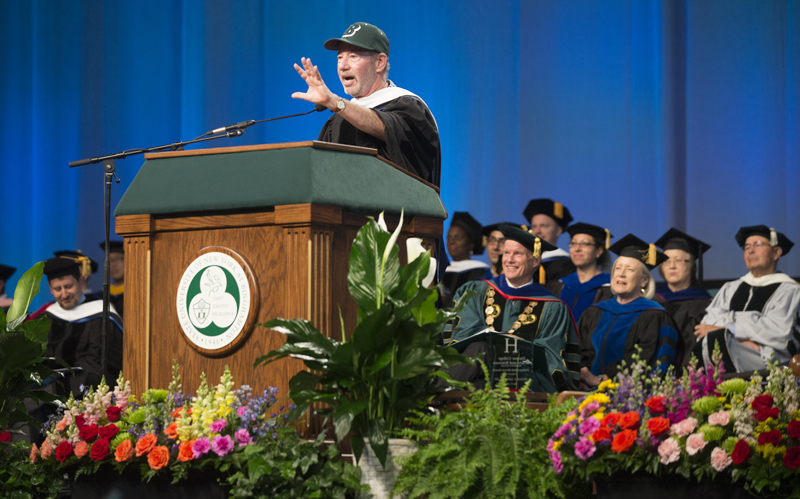 Kornheiser, a member of the Binghamton University Foundation Board and a regular philanthropic contributor to the Pipe Dream student newspaper, spoke at the Harpur College of Arts and Sciences’ morning ceremony on May 21. The “Pardon the Interruption” host, who took off his Commencement cap and gave his speech wearing a Binghamton University baseball cap, recalled how he needed a second science course in order to graduate.

Science did not come easy for the English major.

“English majors are not quite as pretentious as philosophy majors, but we’re very, very close,” he said. “We sit in dark rooms, read books and we think we are smarter than you and you and you.”

Kornheiser bypassed physics, biology, chemistry and geology (which he referred to as “rocks”) in his pursuit of a second science course. He finally discovered Biology for Non-Science Majors, only to be discouraged by all of the actual science majors in the class. After missing many of the classes and getting a zero on his lab practicum, Kornheiser made an appeal to his professor.

“We’ve got to work a deal here,” he recalled. “You don’t want me to flunk. If I flunk, I’m going to work at Dunkin’ Donuts on Rano Boulevard for the rest of my life! We’ve got to be able to work something out here: Do you have a lawn? I’ll mow your lawn. A car? I’ll wash your car. … She said: ‘You got a zero on the lab practicum.’ I said: ‘I had a bad day!’”

Kornheiser said he outlined the textbook on yellow legal paper and memorized his notes. He needed a 65 on the final test to pass the class.

“I never went to another science course. I don’t even watch Bill Nye the Science Guy! I then got a job: sports writer at a newspaper.” 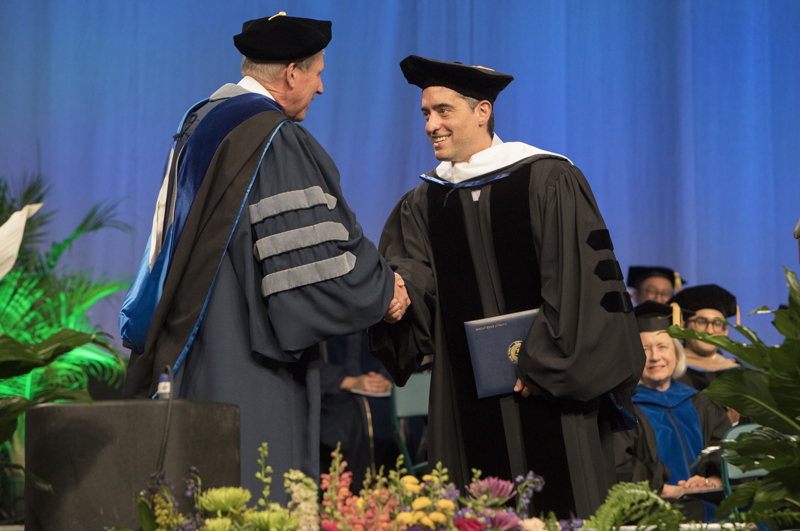 Nathan Englander'91 is greeted by Provost Donald Nieman during the Graduate School Commencement ceremony on May 19. Image Credit: Jonathan Cohen.

Englander ’91, an award-winning author, playwright and translator, expressed his gratitude to Binghamton University and the power of public education after receiving the Doctor of Letters.

“As a product of state schools, I can’t tell you how much I am thankful for and deeply believe in the mission of public education,” said Englander, who spoke at Harpur College’s midday ceremony on May 21. “Without Binghamton University’s education, I wouldn’t have been able to study at the level I did. I would have slipped through the cracks, for sure. I never would have had the chance to pursue my dreams.”

He also emphasized the power of community at Binghamton University.

“Today’s joy is a shared joy and today’s success is a shared success,” he said. “Let our embrace of the Binghamton community be a lesson we can take to all communities through which we will move.”

Englander urged the Class of 2017 to pursue their own goals, leaving them with the words of writer Doris Lessing: “Whatever you are meant to do, do it now. The conditions are always impossible.”

Ecological issues that have faced Easter Island (also known as Rapa Nui) are issues affecting many parts of the planet, Haoa said. He cited water problems and food scarcity as examples.

“Look around: This ecosystem of ours – this home of ours – poses so many challenges,” said Haoa, who spoke at the Graduate Ceremony on May 19 and received a Doctor of Humane Letters.

Education is a key, he added, as children can already begin learning about “ecological realities.”

“Rapa Nui is an example of what could be happening on our planet,” Haoa said. “We can create a future that will allow us to survive better.”

MacDonald ’68, MS ’73, is a pioneer in the field of internet communications who led Binghamton University’s development from mainframe computers to personal computers. She stressed the importance of “difference” during her talk at the Watson School ceremony on May 20.

MacDonald noted that she was often the only woman in the room while working with computers or teaching undergraduate computer classes at Binghamton University.

“As my career progressed I strived to make a difference,” she said. “I could foster diversity with my employees. I could make every effort to be inclusive. Whether you think you are different or not, there is always a way to recognize and work with the diversity of others and draw strength from the associations you have formed.”

MacDonald urged the members of the Class of 2017 to “be the one that extends kindness. Make your voice heard with dignity. Be the one to hear all opinions, listen and not be judgmental.”

“Remember to use the power of being different to be the most powerful you,” she said.