Chemists and physicists to conduct research and teach in building 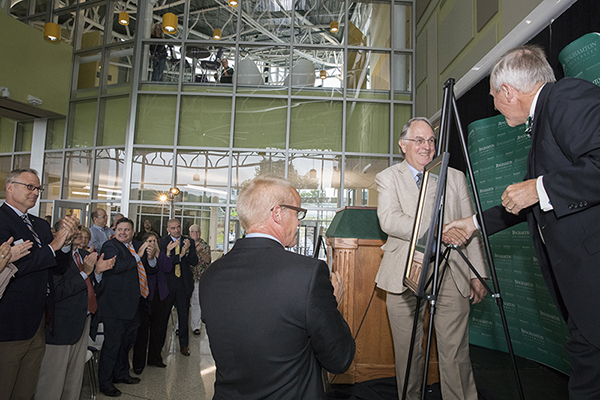 “This opening is a turning point in the history of Binghamton University,” said President Harvey Stenger. “The Innovative Technologies Complex was constructed with the intent of adding research facilities, but this new Smart Energy Building integrates the basic sciences of chemistry and physics into the ITC.”

Lack of appropriate facilities on the main campus have been a handicap in the past for chemists and physicists conducting research, Stenger said, but even so, research funding is growing at a faster rate than at all of the other SUNY university centers. With this state-of-the-art facility, the handicap has been lifted – and it took a team. “We’re all on the same team,” he said. “It’s about teamwork.

“To move our great faculty into this facility will make the world a better place,” Stenger said. “Smart energy. That’s going to be our focus. The fact that these faculty are here and many are doing research in the areas of smart energy is a great advantage that we have.”

About the Smart Energy Building

• The new $70 million, 114,000 square-foot Smart Energy Building will accommodate research and development initiatives for the departments of chemistry and physics. Laboratories, classrooms and offices are included in the project, which includes space for faculty, students, and industry scientists and engineers to work side by side to create new energy technologies and maintain and expand the regional workforce.

• The two-story building features ornate custom steel in public areas, as well as a basement and a green roof. Natural stone landscaping and grading complement the Center of Excellence, Biotechnology, and Engineering and Science buildings.

• LEED Gold standards were followed throughout construction — the second-highest certification possible and appropriate for a research building dedicated to smart energy. Features include photovoltaic panels on the roof to produce electricity, hydronic radiant heating in the floor, controlled LED lighting, individual space monitoring to reduce air flows and energy use, and water-cooled equipment wherever possible to conserve energy.

• During the design and construction phase of this project, the investments made to build the Smart Energy Building had an economic impact of $90.7 million on the Broome/Tioga region. These expenditures also supported 915 local jobs, including 366 direct construction jobs.

Stenger told the crowd that the real star of the opening is the building, which has been built to LEED Gold standards, “which is not easy in a research facility due to the amount of air changeover required in chemistry and physics.

“Some yet-to-be-thought-of inventions will occur here and will have an impact on the environment and the local economy,” he added. “The economic impact resulting in the activity in this building over the next decades will be significant.”

“Why make these investments?” asked state Sen. Fred Akshar. “Because it’s the right thing to do. I am continuously blown away by the extraordinary accomplishments being made here at Binghamton University and the new opportunity that will be afforded to students. As Binghamton University expands, we see signs of a renewed economy and renewed quality of life.”

Assemblywoman Donna Lupardo called the opening a “truly historic moment” for the University, state of New York and community. She recalled that the Smart Energy Building “wasn’t even on the radar 12 years ago, and now we have this state-of-the-art complex that is really the pride of New York.

“At the risk of stating the obvious: research matters, and science matters,” she added. “We owe a debt of gratitude to scientists. These days we have enormous challenges for energy resource management and your vision working across the disciplines will improve lives, boost the economy and protect the planet. This day will be very important looking back.”

Don Nieman, executive vice president for academic affairs and provost, spoke of the research that will be conducted in the building.

“You’ll be amazed by what’s here, but what’s really important is what it allows us to do – conduct path-breaking research and education on one of the most critical challenges facing our society – finding smart solutions for the clean energy we need to power cars, data centers, devices and industries,” he said. “Binghamton University is at the forefront of energy research. We have renowned scientists and engineers who are conducing basic and applied research on batteries, energy-efficient computing, thin film solar energy panels and much more.”

Nieman said the collaboration promoted by bringing together chemists, physicists, materials scientists and engineers in close proximity will enable them to provide the clean energy solutions needed to fuel responsible, sustainable economic growth.

Before the ceremony ended and the tours began, Stenger announced a surprise. With no ribbon to cut, he and Nieman instead unveiled a photo and plaque honoring M. Stanley Whittingham, distinguished professor of chemistry and materials science. “Stan is known throughout the scientific world for his research,” Stenger said. “His work has put Binghamton on the map. The University is honored to have him lead our efforts in battery storage, conversion and optimization, and we thank him for sharing his knowledge with students and colleagues.”

“I’ve had a great time at this University or I wouldn’t be here today,” a surprised Whittingham said. “This is a great place to work, with great colleagues. I can collaborate with anyone in any department so interdisciplinary work is easy to do here with a great Research Foundation that helps you get grants in. I can’t think of a better place to do research.”