Daniel McMonagle is introduced during the world finals of Chinese Bridge competition for foreign college students. The 2017 Binghamton University graduate was the North and South America champion at the event, which took place in July and August in Changsha, China. 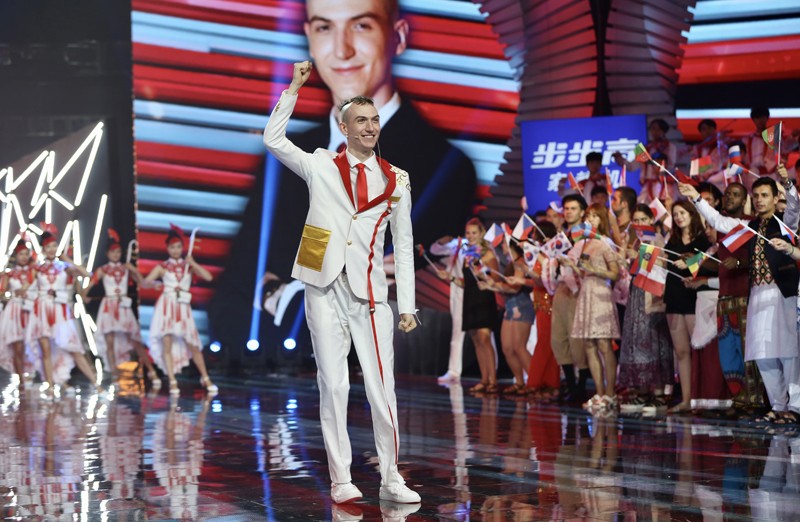 Daniel McMonagle is introduced during the world finals of Chinese Bridge competition for foreign college students. The 2017 Binghamton University graduate was the North and South America champion at the event, which took place in July and August in Changsha, China.
By Eric Coker

For Daniel McMonagle ’17, competing on the global stage of the “Chinese Bridge” Language and Cultural Competition was an eye-opening experience.

“My major was linguistics and this (competition) was like heaven to me,” McMonagle said. “There were all of these students from 100-plus countries in one area and we were all communicating. There was a lot of cross-cultural exchange and getting to enjoy the presence of people you’ve never met before.”

It was McMonagle who opened eyes throughout China when he not only won the American Continents championship, but also finished fourth in the world in the competition for foreign college students.

McMonagle’s journey to the championship stage began when he started at Binghamton University in the fall of 2013. He spent the next three years competing in regional “Chinese Bridge” competitions. The language proficiency contest is sponsored by Hanban (the Chinese National Office for Teaching Chinese as a Foreign Language) and requires contestants to display skills such as speeches and performing a talent.

The Clarence, N.Y., native gained additional experience by studying at Nankai University in Tianjin, China, and receiving a prestigious Critical Language Scholarship to spend summer 2016 in Dalian, China. He also helped the Confucius Institute of Chinese Opera at Binghamton University by serving as an instructor at its STARTALK camp.

“Chinese Bridge” is a major focus for the Confucius Institute of Chinese Opera at Binghamton University, Director Zu-yan Chen said.

“We encourage Chinese language students of all levels to participate,” Chen said. “We tell them in the beginning that we don’t decide if they can travel to Boston (for the regional round) or even Changsha, China (for the global competition), but the preparation process will undoubtedly help them improve their Chinese language and cultural proficiency to a great extent. The journey is the key.”

Before 2017, McMonagle’s best Chinese Bridge performance was finishing second at a regional event in Boston. He decided to take a last shot at advancing to the global competition in Changsha, when he knew he would graduate in May 2017 with a degree in linguistics and Chinese studies.

“This is it,” McMongale recalled saying to himself. “If I don’t win this (regional), I’ll be doing nothing over the summer!”

McMonagle won the eastern U.S. regional event in April, defeating students from universities such as Harvard, Princeton, Columbia and the Massachusetts Institute of Technology. He became the third Binghamton University student in the past four years to qualify for the global stage (Carrie Buck took part in 2014; Alyssa Berkowitz participated in 2015).

McMonagle traveled to China in July to compete against more than 140 students from 122 countries. In the first round, participants showed off their speeches, cultural skills and talents and took part in a word contest similar to the “Pyramid” game show.

This narrowed the field down to a round that featured Chinese trivia.

“It got a little nerve-racking,” McMonagle said. “They gave us 100 Chinese characters. You needed to know how they were written 2,000 years ago and all of the stories behind them. This wasn’t the easiest thing to study for.”

The top two in each division (Americas, Asia, Europe, Africa, Oceania) then advanced to another round of word recognition.

Besides all of the Chinese language and talent they had to display, competitors also had to deal with a barrage of television cameras. The Chinese Bridge event is featured annually on the nation’s second-largest network, the Hunan Broadcasting System. Like reality television such as “American Idol” or “The Voice” in the United States, the show would not only feature the competitors on stage, but focus on what they were doing or thinking off stage.

“In between rounds, they would film us behind the scenes,” McMonagle said. “We’d go back to our hotels and the camera crew would be waiting there. It could be tiring because we’d think they were done and they would just show up out of nowhere.”

McMonagle said he was often asked about his competition, as the show tried to get his reaction to the (often confident) comments of others. McMonagle’s responses were filled with modesty and kindness.

“They would say to me: ‘This person says he is going to get first place. What do you think?’” he recalled. “I would always say: ‘Well, my biggest competition is myself. I can’t worry about anyone else.’”

For McMonagle, performing for the cameras and displaying “good energy” was even harder than studying Chinese.

“I learned that it’s difficult to be on television,” he said with a laugh. “It’s harder than I expected.”

McMonagle advanced to the finals of the Americas championship against Jay Gonzalez of Stanford University.

“Because it was my fourth time – not on the TV show – but in the competition, I think I was able to be calm onstage,” McMonagle said. “I wasn’t nervous – unless I made a mistake!”

McMonagle edged Gonzalez in the word recognition to claim the North and South America title. But there were no tears of joy from the soft-spoken McMonagle.

“I’m a mellow person as it is,” he said. “That was my schtick on the show: a mellow guy not bothered by much. That would annoy the directors sometimes. It’s a TV show and they want a big reaction to make it more entertaining.”

By the time he was crowned Americas champion at the end of July, McMonagle was understandably tired.

“I didn’t (go in) expecting to get first place,” he said. “So whenever I got onstage, I wasn’t freaking out. But it got harder each round. There was no downtime. That was hard for me and the others. When you’re in a competition, you want to relax sometimes. It was a lot.”

And then there were five

McMonagle and the student champions from Europe (Bernhard Haefner from Germany), Asia (Bin Muhamad Shahmeer from Malaysia), Africa (Mohammed Elmoiez from Sudan) and Oceania (Anne-Aelis Myriam from Australia) advanced to the global finals on Aug. 1.

The top five were taken to various locations for show segments. Some were filmed at a company that makes drones, while others went to robotics or virtual-reality firms.

“Because we were the only competitors left, we got even more TV time,” McMonagle said.

That wasn’t the only difference he noticed.

“The early rounds were friendly,” he said. “Some groups were more competitive than others. But when you get into the top five – that’s the real deal. I’d see (the others) studying all of the time and it made me study more. There was no room for mistakes.”

The five champions worked so hard that they lost all track of time, McMonagle said.

“Somebody at the table said: ‘It’s Sunday’ and the rest of us would say: ‘What? Sunday?’” he recalled. “I couldn’t keep track of the days!”

For the world finals on Aug. 12, the competitors took part in elimination rounds in front of a large audience.

“That adds some pressure,” McMonagle said with a laugh.

McMonagle survived the initial speech contest, but stumbled in the second round in what he considered his weakest subject: trivia.

“I have confidence in my language abilities and to speak fluently,” he said. “But when it comes to history and trivia, I’m still a little lacking.”

With fourth place secure, McMonagle sat back and watched as the Asian and African students competed in the finals. Elmoiez — the student from Sudan — was crowned world champion of the 16th Chinese Bridge competition.

“It was exciting to see them in the last round,” McMonagle said. “I had my bets on the Malaysian student, but the guy from Sudan come back and took it. It was good TV!”

Looking back on a championship summer

The Chinese Bridge competition aired on the Hunan Broadcasting System in September and October. McMonagle admitted that he never thought about the number of people in China who would eventually watch the contest. But he always had the audience in mind.

“Having a studio audience was good,” he said. “I always tried to make a connection with them. If I was preparing a speech, I tried to have something in it that would make the audience laugh or make them more interested in me.

“I would always say to the camera: You can search me online. I’m going to have a Chinese social media account. You can find me!”

Becoming a reality-TV celebrity has McMonagle further exploring that avenue in China.

“I’ve been told: ‘We saw you on television. You should do these other shows,’” he said. “I think: ‘Really? As long as they would have me, I would love to go back.”

But there are other opportunities for McMonagle. He is considering applying for positions in the U.S. government or getting a master’s degree in China. One of the competition awards was a full, three-year scholarship at a Chinese university.

“I hope getting into the top five will qualify me at a few schools,” he said.

“This array of courses laid a solid foundation for his language and cultural proficiency,” Chen said.

McMonagle also praised the assistance of Chan Wang, a visiting instructor of Chinese language and theater from the National Academy of Chinese Theater Arts.

Wang helped train McMonagle for the past two years, concentrating on stage presence and performance. She even accompanied him to Changsha for the competition.

“Throughout the entire process, she was like a second mother to me,” he said. “She had as much invested in this as I did. She helped me get to the level that I did.”

McMonagle said his international triumph proves that Binghamton University has one of the best Chinese programs in the United States.

“We have great language classes,” he said. “Besides languages, there are Beijing Opera opportunities. If it weren’t for the Opera and the Confucius Institute when I came to Binghamton, there would be no way I would’ve gotten so far. Hopefully, me being on this television show puts us on the map as far as foreign-language ability goes.”

Posted in: In the World, Harpur