We are not so different

At refugee shelter, lines blur between “us” and “them”

Graffiti on a door in Leros reads: We are all refugees. 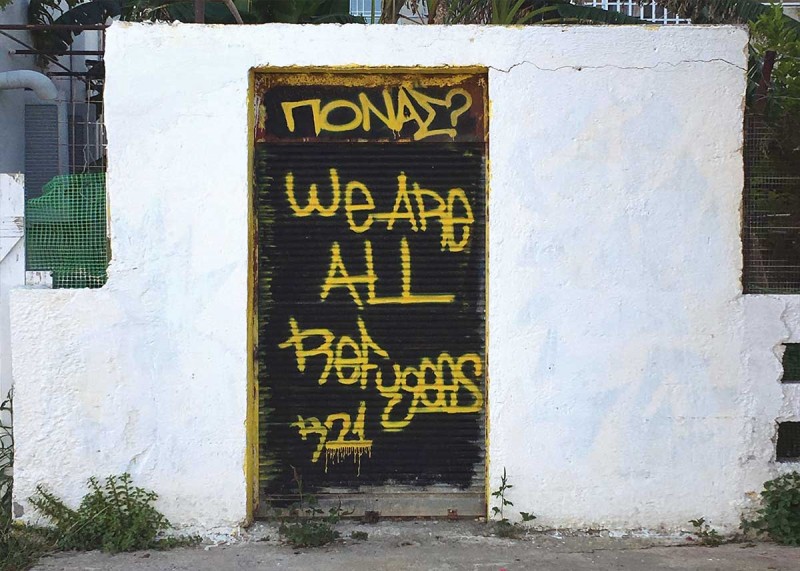 Graffiti on a door in Leros reads: We are all refugees.
By Diana Bean ’81

Maha may not remember it, but Zoe will never forget the day they said goodbye.

Late one night in June, 5-year-old Maha was about to embark for Athens with her mother and brother, leaving other family members behind in the refugee shelter that had been their temporary home on the Greek island of Leros. Over several weeks, she and Zoe Shannon, a Binghamton University sophomore and volunteer at the shelter, had become “attached at the hip,” and Shannon had come to the shelter to say farewell.

“I was trying to say bye to Maha, but she is 5 and didn’t understand. I didn’t want her to see me cry,” Shannon says, so she walked out into the dark, away from the shelter, and turned a corner.

“Before I knew it, six young men and her two uncles were running after me, saying, ‘No! You aren’t allowed to cry. We can’t see you sad,’” Shannon says. “There I was, in a foreign country, with only a few people who spoke English, but in that moment I felt so much a part of a tight-knit community that I knew I wasn’t alone.”

Shannon and 17 Binghamton students traveled to Leros, in the Aegean Sea, with Associate Professor of History Kent Schull and anthropology graduate student Şule Can (“shoolay jon”). The students had spent the spring semester learning about the current Middle East refugee crisis. Travel to Leros for two weeks of volunteering was a course requirement, and they developed service projects to take with them.

The shelter — a large wing of a former hospital — is run by the Leros Solidarity Network and holds about 120 at-risk refugees: families with small children, unaccompanied minors, the elderly, pregnant women, ethno-religious minorities and members of the LGBTQ community. Other refugees on Leros live in a camp, behind razor wire, known as the “Hot Spot.”

They come from many countries — Syria, primarily — and are fleeing for a variety of reasons: civil war, persecution, poverty or natural disaster.

While the international community refers to those in the shelter as refugees, Schull calls them residents.

“The students learn that these folks had lives in Aleppo, they had homes in Damascus. They were teachers, doctors, businesswomen and men, full-time moms and dads, and out of sheer chance, they were born in Aleppo and we were born in the United States,” he says.

Plans are made, then changed

The students were eager to share their service projects; some had raised money to buy Legos, sports equipment and menstrual hygiene products. 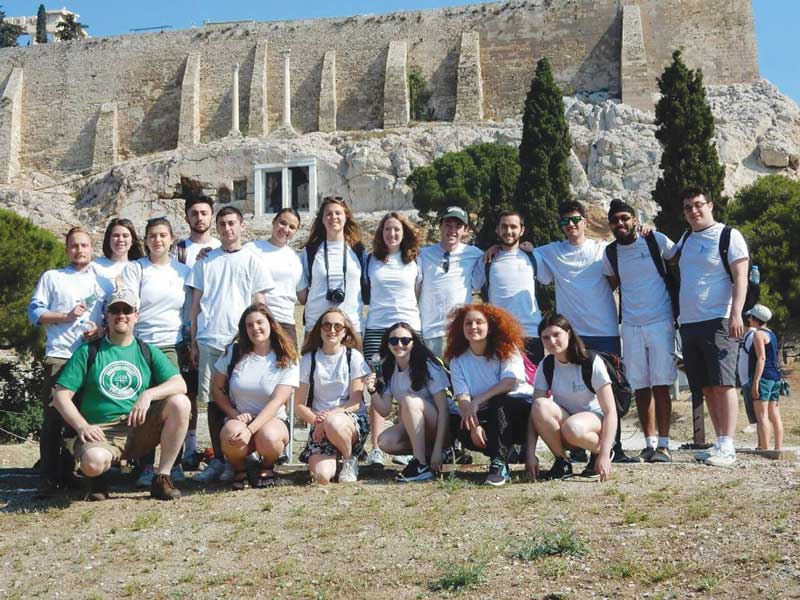 Kent Schull (in green) and his students visit the Acropolis in Greece.

But when they arrived, they discovered there were more pressing needs to be met. The shelter needed an English teacher, a swimming instructor (many of the refugees had arrived by boat, yet did not know how to swim) and some help organizing a large amount of donated goods.

“We had to be very flexible because people are coming and going all the time,” Schull says, adding that the English teacher had left just days before his group arrived. “I didn’t want this to be ‘voluntourism,’ I wanted to help the organization be able to help the residents.”

Sophomore Allison Tipaldo was prepared to organize soccer matches, but she spent most of her time teaching English. “I had magazines I brought from home: Seventeen and Reader’s Digest. We used our phones to translate from Arabic to English and back again.”

Joseph Del Vicario, a junior, had planned a “culture night,” to introduce the idea of America as a pluralistic society created from people of many different cultures and ethnicities. Instead, he says, “I helped paint and break down walls for a local NGO moving offices. And I taught English, because I had tutoring experience and knew a bit of Arabic.”

“Whatever the shelter needed, we tried to provide it, from scrubbing pots to engaging the children so their parents could take English lessons,” Schull says.

A shift in understanding

Şule Can grew up on the Turkish-Syrian border (her town was part of Syria until it was annexed by Turkey in 1939). She is a PhD candidate in cultural anthropology, doing research on refugees in border regions, and was co-director of the trip.

As of mid-August, official records indicate that 14,156 migrants have entered Greece this year. They are coming from (in descending order) Syria, Iraq, Republic of Congo, Pakistan and Afghanistan. By comparison, Greece took in 176,906 migrants in 2016 and more than a million since the beginning of 2015.

Can watched the students wrestle with their emotions as they processed what they were seeing. “The students, of course, hadn’t encountered such a human tragedy before. They encountered people in limbo; it’s hard to understand for those who have a secure future.”

“You read about refugees, but when you meet some it’s different,” Del Vicario says.

“‘Refugee’ is a buzz word that is used as a political device that takes away the human element, and I think that’s what this trip taught me. When I left there, I wouldn’t even call them refugees. I would call them friends.”

Can helped students navigate unfamiliar territory. For instance, most of the residents were Muslim, and because it was Ramadan they wanted the students to join them when they broke their fast after sundown.

“That’s a very Middle Eastern way of showing hospitality, sharing what you have. It would be rude not to eat together. It was a tricky moment for me, because I was trying to warn our students and tell them they need to join them,” Can says.

“The food was from the Greek army. It was a little sad to say the food was not that healthy or tasty; it was packaged food. I felt kind of bad because I was forcing them to eat that, explaining that they needed to share the food because it was Ramadan.”

What the students remember is not the food but the friendship.

Sophomore Eden Fernandez recalls an outing at the beach with some of the residents, followed by a large, family-style dinner celebrating the end of the day’s fast. “We all felt welcomed and like part of a big family as we shared food, laughs and stories with one another. It still blows my mind how even with the language barrier and very different cultures, the volunteers and residents were able to enjoy each other’s company.”

Before they even arrived in Greece, Schull tried to prepare the students for leaving.

He knew there would be feelings of guilt for things left undone and problems not solved. “I had to disabuse students of the notion that we’re going in to rescue people or to fix their problems,” he says. “When students asked, ‘How can I help them emotionally? I don’t speak Arabic,’ I told them, ‘It’s not your job to be their psychologist. You can be a friend.’”

That was easy, the students say, and many use social media to stay in touch with friends they made.

“What comes next?” is more difficult.

It’s a question that weighs heavily on some of the students, Can says. “But it’s good, because this is how people start taking action.”

Before she left for Leros, Shannon says she kept asking herself, “What is my purpose? Why am I going?” When it came time to leave Leros, she didn’t. She gave up a few weeks traveling abroad to continue volunteering at the shelter.

“Now I can answer that question; it’s so I can bring this knowledge and experience into all parts of my life. It has changed the trajectory of what I want to do with my life, as well,” says Shannon, who has applied for a grant to study Arabic and is considering a career in immigration law.

Tipaldo is president of Circle K International on campus, an offshoot of Kiwanis International. She intends to start a student group on campus to raise support for the shelter.

Del Vicario wants to encourage Americans to think more broadly about privilege and circumstance. “I wish people could understand how truly empowering and fortunate we are to have the word American attached to us. On the flip side, people are stigmatized and villainized just for being born in a certain country.”

As the Binghamton group was packing up, Can says, the residents were asking her to translate their messages for the students.

“They told me how good they felt, and how our students weren’t just any old volunteers but were good friends. They were appreciative that they were so caring about the refugees’ concerns. They were friendly, not patronizing or treating the time as a duty.

“It was so touching; I was trying to translate and I also wanted to cry.”

“One student, as we were in the airport waiting to leave, was sobbing on my shoulder, saying, ‘I get to go back to my rich-ass neighborhood and they’re stuck here,’” Schull remembers, his voice catching.

The Leros trip was a pilot project — a life-changing pilot project, Schull says. He hopes to do it again, although the destination may change as the need warrants.

“We can’t end the civil war in Syria, we can’t speed up the asylum cases, but we can as a university do something to help those in need,” he says. “A university has a microcosm of everything that refugees need, from public health to finance to business to psych to social sciences, education, human development, etc. And we have a ready-made service army of students — they are idealistic, they have passion, energy, and they really want to make a difference.”

About the Leros Shelter

The Leros Solidarity Network was founded by local citizens on the small Greek island of Leros. It runs the PIKPA shelter, once a disused hospital block that, in 2016, was renovated and now offers safe accommodations for up to 120 people. It exists solely on donations.

Posted in: Arts & Culture, In the World